Where the Jobs Are

The May 2011 Jobs Report indicated that unemployment ticked up to 9.1 percent. This caused strong reaction in the media and the markets, just short of Mr. Howard Beale‘s iconic primal scream.

But are job seekers actually as discontent as reports like this would lead us believe they could be?

The Bureau of Labor Statistics regularly documents the level of discouraged workers — e.g., the number of individuals not in the labor force who want and are available for work, and who have looked for a job sometime in the prior 12 months.  According to their statistics, the number of discouraged workers dropped this year in comparison to last (numbers are in the thousands):

There could be one of two reasons for this:  either jobseekers have given up searching and made themselves unavailable for work, or they’re finding jobs.

Looking at another set of statistics, certain types of occupations are continuing to trend upwards — namely Management/Professional and Service occupations: 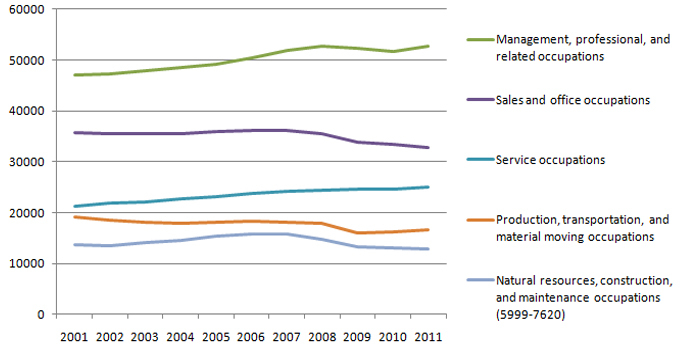 Production/Material Moving occupations are also seeing a reversal in its almost decade-long trend downward.  Sales occupations are not surprisingly taking a hit — often a commission-based field, it’s not easy to sustain a living when consumers are primarily sticking to buying core staples.

With this in mind, choose wisely the path you take as a jobseeker.  And avoid a return of the rage that Howard Beale released over a similar jobs situation a generation ago.